January 9, 2019 by Editor Editor in Uncategorized

Are Diarrhea and Fever in Babies Caused by Teething? Here’s What Science Says 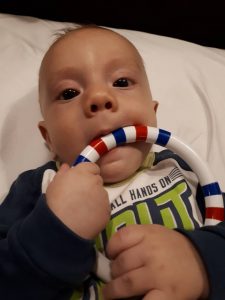 Teething in infants is a topic parents have always been interested in. It is accompanied by changes in behavior or different physical manifestations, and we may say it goes unnoticed only in a few cases. We have decided to review the literature on this topic and show you what previous research has shown.
Although very important, teething can be stressful both for the child and for parents. We should always keep in mind that maintaining the health of teeth and gums in babies and children is the basis for healthy teeth and gums in adulthood. Teething occurs by certain order, although there may be deviations in time or order of emergence. Signs of teething are usually disrupted sleep, redness on cheeks, chewing different objects and fingers or hands, feeling weak, bad mood and hypersalivation.

Signs and symptoms
• Disrupted sleep
In some children, teething is a painful process that makes them wakes up crying. It would be best to take the child in the arms and provide it with comfort and safety.
• Hypersalivation
Hypersalivation can be a sign of tooth formation and teething so one does not need to expect tooth eruption after the onset of hypersalivation. Excessive saliva can cause skin irritation so baby skin should be kept dry using a soft cloth. It is also advisable to consult a pediatrician about the care of the baby skin due to irritation.
• Swollen gums
Sometimes immediately before the eruption of teeth gums become red, swollen even blue.
• Chewing objects
Chewing objects is one of the ways the baby examines the world around it, but if it does so more often than usual, you may suspect it is teething. The pressure the tooth exerts on the inside of the gums is diminished by pressing from the outside, which the baby achieves by chewing down objects. The desire to chew down objects can also be a sign of disapproval due to experiencing a tooth as a foreign body.
• Sucking fingers
In addition to chewing on various objects, children also suck or bite their fingers. This reduces the itching that occurs when teething. Sucking fingers is known to be soothing for the child, so care should be taken on the child’s hand hygiene.
• Rejection of food
Swollen and painful gums can lead to a change in eating habits; For example, a child who eats solid food prefers to be breastfed or fed on a bottle because the spoon irritates the inflamed gums. Also, a baby that is still breastfed or fed on a bottle can start rejecting food as the pressure that occurs during sucking is transferred to the gums and ear canal.
• Bad mood and weepiness
Teething is the movement of teeth through the bone and gums which more often occurs at night and consequently leads to bad mood and weepiness due to insufficient sleep. In addition, the process of teething is painful and makes the child irritable.
• Pulling ears
Grabbing or pulling ears may indicate ear inflammation or teething. If a child refuses food at the same time, sleeps poorly and has a fever, one should suspect ear inflammation and consult a pediatrician.
• Cough
In some children, teething is accompanied by cough. Parents should report it to the pediatrician in order to rule out other causes of cough.

Two most common misconceptions about teething

There is still a misconception (even among medical staff) that teething causes high temperature (over 38 °C). It can happen when we compare the body temperature of the two children who are teething that one child has a slightly elevated body temperature compared to the other, but such a mildly elevated temperature cannot be called fever. Body temperatures above 38 °C can never be attributed to teething, but the cause of such a temperature must be sought and a pediatrician should be consulted.
Another misconception is that teething causes diarrhea in infants. Excessive diarrhea or even constipation are not considered the side effects of teething. Nevertheless, in some children, these two symptoms occur along with teething, and the causes for it may be the following:
• At around the 4th to 6th month the baby’s immune system starts functioning independently of the mother’s, which decreases the general resistance of the body and mild temperatures and diarrhea occur more frequently.
• In this period, children begin to put various objects containing different microbes in their mouth
• A decrease in the level of the immune system obtained from mother leads to building own immune system, and this period may be accompanied by more often mild fevers or diarrhea, and it happens simultaneously with teething.

The conclusion made after examining scientific papers is that teething never causes high temperature and diarrhea. If the symptoms are expressed, you should always consult a pediatrician. Teething is a natural process that has transient side effects but they are neither drastic nor prolonged.

Made with by Drive